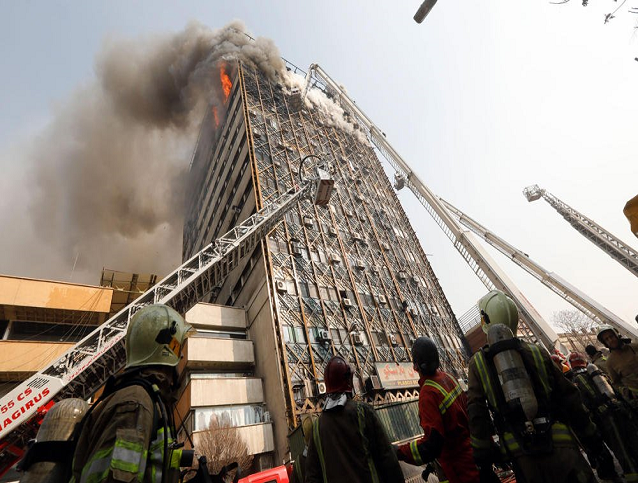 With the continuing focus on building safety, fire-resistant cables – and their ability to service critical systems in the event of a fire - remain under the spotlight. However, it has become clear that fire-resistant cables offer different levels of performance, and not all of them can provide protection in a real-life fire scenario. Wrexham Mineral Cables Commercial Manager Steve Williams explains the importance of choosing the right cable.

The safety of tall buildings is rarely out of the headlines, with the Gulf region suffering a spate of fires in its high-rise buildings in recent years. The blaze at the 48 storey Abbco Tower in the city of Sharjah, and another at Dubai’s 337 metre Torch Tower, which has caught fire on three separate occasions, are prime examples where occupant safety has been at risk.

To date, the focus of building safety has been largely on identified defects. But we can only truly make buildings safe by identifying all possible hazards - such as the installation of inferior fire-resistant cables, and it is these which need to be put under the spotlight.

Should a fire break-out, fire-resistant cables play a fundamental role in ensuring that the emergency and building critical systems are supported, providing vital time for the safe passage of occupants out of the building, and allowing for shutdown procedures to take place. Applications where a fire-resistant cable would be specified include emergency lighting, sprinkler systems, extraction systems, smoke dampers and shutters, emergency generators, pressurisation fans, emergency voice comms and fire alarms, all of which can prove critical during a fire.

Depending on the construction of a cable, protection of the solid or stranded conductors is achieved with insulation such as magnesium oxide (Mgo), MICA tapes and polymers. The insulation in turn is protected by an outer sheath which is commonly either a copper, steel wire armoured or a fire-resistant polymeric sheath, each of which performs differently under fire conditions.

All of these standards have a variant of time and temperature the cables are tested at under fire conditions. These can range from a 30 minute rated cable tested at 830oC (PH30 cable as per BS 50200) to a three hour rated cable tested at 940oC (BS 6387 category C). All of these standards should provide reassurance to the specifier that the chosen cable will continue to work in the event of a fire.

We all know fire is a dynamic force that moves, expands, and changes the shape, size, and properties of all it comes into contact with. To meet the criteria of a true fire scenario, you would expect testing to include the risk of flashover, falling debris during the fire (including directly onto the cable) and water exposure either from a sprinkler system or fire hose.

There are good examples of test scenarios within the British Standards. For example, BS 8519 (tests on cables over 20mm) requires direct impact testing and jet water pressure tests on one single sample. BS 6387 CWZ (tests on cables under 20mm) is another example which calls for a three-hour fire test, which could replicate trapped residents in a tall building or petrochemical leaks in a refinery. The safety critical equipment could be needed to function for several hours in these scenarios.

However, WMC feel there needs to be a single test for ENHANCED fire-resistant cables. Regardless of size or construction, if a cable is required to function in the event of a fire, each single cable sample must have to pass a true fire scenario test.

Changes have been welcomed where BS 8629 recognises that polymeric fire-resistant cables may not survive direct impact during a fire. It states all non-armoured fire-resistant cables must be installed inside fire-resistant conduit: this of course brings additional complications and extra costs. For example, the conduit aids the travel of smoke from the source fire along the conduit to other parts of the building – this smoke is toxic, therefore much more harmful when inhaled, and explosive around even the smallest spark, easily resulting in the spread of fire rather than the containment of it. This could cause huge implications within hazardous areas, especially when zones of a building are segregated as non-explosive and explosive, in some cases simply by a fire wall.

Most fire-resistant cables rely on polymers or tapes to increase their resistance to fire, yet these materials can burn away at as little as 80oC, exposing the critical conductors. And in order to give some soft skinned polymer cables flame retardant properties, halogens are added to the outer sheath such as chlorine, bromine and fluorine. When exposed to a fire, these halogenated polymers will release halides which are extremely toxic. This smoke not only restricts breathing, it increases the risk of this being inhaled when following the common rules during a fire. The recommendation during a fire is to get down low and crawl along the ground until you find the nearest available exit. From our own investigations, that are demonstrated on our website, the smoke released from some of these cables is so dense it actual falls to the ground. Our in-house testing is carried out on one single cable sample; imagine an installation where dozens can be in parallel. We also discovered that this smoke is not only dense, it’s also flammable.

Failure to recognise the need for a true fire scenario test is extremely real. In 2018, a survey of fire-resistant cables conducted in Hong Kong found that 75% of 12 fire Resistance cables removed from public site, all of which were used in safety critical systems, actually failed the very tests to which they were certified. One sample failed the basic fire test of BS 6387 after just 22 minutes. This demonstrates the inconsistency in the standards performance to measure true or real fire condition performance.1

It is for that reason that we have been calling for more stringent testing standards with the introduction of a higher classification of fire survival cable, for those which can continue to power critical circuits in the event of a fire and withstand the rigours of safety systems such as falling debris, collapsing walls, fire hoses or even activation of high-pressure sprinklers and smoke extraction.

Mineral Insulated Cable (MIC) has been used commercially since 1937. From a fire performance perspective, it offers many inherent safety and fire-resistant advantages.

It is made by placing magnesium oxide around copper rods inside a circular copper tube, known as the copper sheath, for its protection - meaning it has its own fire-proof conduit. And unlike any other type of fire-resistant cable, no polymers, tapes or armouring are used, so this type of cable will operate directly in the heart of a fire and continue to do so safely. The high-density magnesium oxide has a melting point of over 2000oC, whilst the copper sheath has a melting point of over 1080oC.

The continuous operating temperatures of cables are often a key factor in selection decisions. A bare mineral insulated cable can work continuously up to 250oC, far more than any other polymeric fire-resistant cable. Mineral Insulated Cables operate directly in the heart of a fire, whilst continuing to safely operate in temperatures in excess of 1050°C for over three hours, whilst undergoing direct impact and exposure to water pressure in excess of any current British Standard.

Its bespoke construction means it doesn’t require a conduit for mechanical or vermin protection and stops liquids and gas flowing through the cable. These extreme tolerances make it a perfect candidate to create water, air and dust-tight seal with a fully approved mineral cable gland. Because of this, Mineral Insulated Cable is seen not just as a fire-resistant cable but the ultimate fire survival cable, as it provides the best possible resistance to fire, heat, and impact damage. It is for this reason that this type of cable is trusted to operate under the most extreme and challenging conditions and has been installed in some of the world’s most famous historic buildings and iconic structures, including the Marina Twin Towers and Doha World Trade Centre.

With a great focus on building safety around the world, there is growing momentum for more stringent inspections on buildings, and the systems which serve them. From our own investigations, it can prove extremely difficult to inspect cables that are either buried in walls or placed in conduits. Mineral Insulated Cable can be surface mounted, has its own “built-in conduit”, will not degrade unlike polymeric cables and inspection can take seconds.

There has been a real drive across the construction industry to make everybody in the supply chain more accountable throughout the various stages of the building’s existence. For specifiers and designers with whom the responsibility of product specification lies, how can they be held accountable if products cannot be relied upon and do not perform as marketed. Fire survival cables are a vital component of building safety, but because there is a lack of understanding about the important role they play, all too often inferior cables are installed. We are working hard to educate the market about the benefits of specifying fire survival cables such as Mineral Insulated Cables. In an era of greater accountability, there should be no compromise, and as an industry we can no longer aim for minimum compliance to get the job done.

To enquire about Mineral Insulated Copper Cables, please email us on sales@wrexhammineralcables.com or visit our contact page

Government Testing Review Welcomed But ‘More Needs To Be Done’